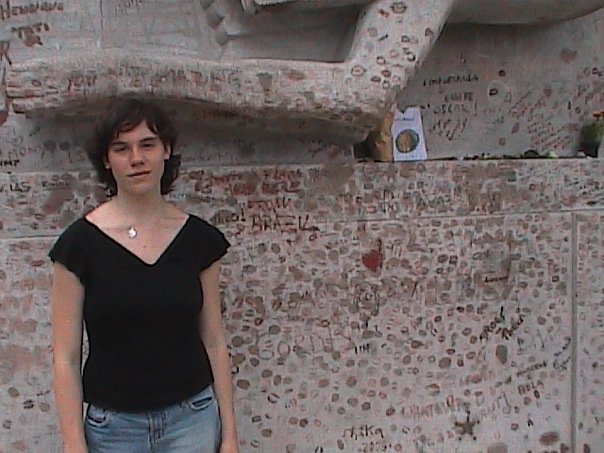 Today I’m sharing my first “serious” poem. I wrote it when I was 14, maybe 13. “What makes a poem ‘serious,'” you ask? Well, it depends on the person. I suppose any real poem takes meter and rhythm into account, as anything else would be prose with randomly-occurring line breaks. I wasn’t particularly learned in the technical aspects of poetry, but on some level I must have known that. I recall writing other poems before it, which were more venting than anything else. They wouldn’t have inspired much thought in an unknown reader. Evocative imagery and emotion help, but are they always necessary? Probably not. This was the first poem that I published or performed publicly, but sharing isn’t a necessity– I mean, hello, Emily Dickinson? Whatever caused the knowledge, “Virgin Matrimony” made me realize that writing poetry would always be important to me. (Reading poetry had established its significance in my life long before that!) If I wrote it today I wouldn’t think very much of it, but I can safely assume it was the first poem that I was proud of. Maybe that’s what made it my first serious poem. It also shows the beginning of style, if part of a writer’s style is subject matter. As an adult I branched out from the outwardly macabre, but memento mori was an enormous part of my work through high school. Specifically death-related imagery has largely been replaced with more generally dark subject matter. This is partially for commercial reasons, as my conventionally happy poems have yet to find any kind of success. Still, I never set out to write a poem with popular consumption in mind– I’m not sure who that creative process would work for!– I just don’t share my happy stuff as often. So, there are creative motivations behind my “dark poetry” as well.

Paper skulls on the wedding dress
teeth woven into
the bridesmaid’s braids
something old, something borrowed,
a beige wedding for an ice-toed bridde

What becomes of matrimony?
Be killed softer.
The minister eulogizes.
His talk of hearts, veins and other organs
has inspired Groom to turn himself inside-out
for his dearly beloved.
arteries hang from his carcass like bells
No secrets, no lies?
Wink and prod the boquet
at the first girl to expire.